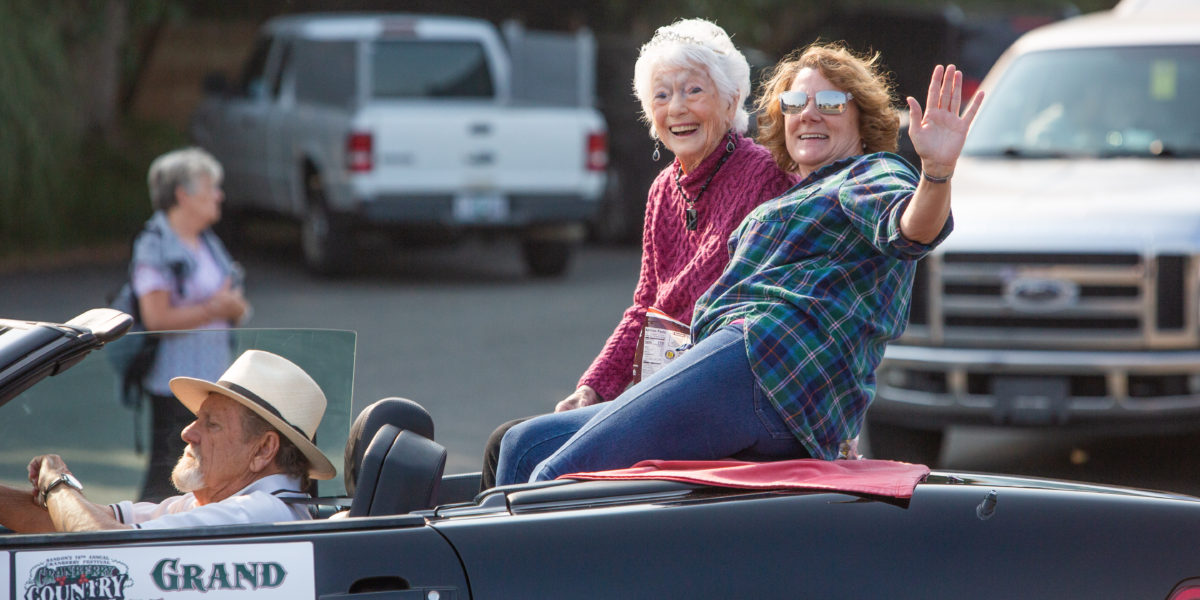 The Bandon Chamber of Commerce is pleased to introduce the 2022 Cranberry Festival Parade Grand Marshals, Cathy Underdown and Patricia Seidler. These two women were chosen for this honor in recognition of their love for Bandon and the volunteerism they have given to the community.

Patricia retired from Calaveras Title in 2014 at the age of 90. With her daughter living in Bandon, she decided to make the move. Once in town, she immediately started her 25+ hours-a-week volunteer career.

Now at 98 years young, Patricia is enjoying her retirement.

Cathy relocated to Bandon in January, 1999 with her husband, Steve and their infant twins, Darby and Max. They chose Bandon for the golfing opportunities, but quickly fell in love with the community.

Cathy relocated to Bandon in January, 1999 with her husband, Steve and their infant twins, Darby and Max. They chose Bandon for the golfing opportunities, but quickly fell in love with the community.

Cathy served on the Bandon Chamber Board of Directors for more than15 years. She served most of those years as Treasurer on the executive committee, but also as Vice President, President, and Past President.

In conjunction with her Board involvement, Cathy served on the Cranberry Festival organizing committee in many roles. Once she realized how rich in history and tradition the Festival was, she willingly took on the role of Cranberry Court Coordinator for five years. She even oversaw the entire Festival one year so Bandon’s Chamber Executive Director could represent Bandon in Washington DC on Festival weekend.

Cathy has stayed closely involved with the Chamber, serving as bookkeeper for the last 10 years. She even kept things organized for a few months as Interim Executive Director while the Chamber was in transition.

“Thanks to the Chamber and the community for continuing to support the tradition of the Cranberry Festival. It’s a humbling honor to be chosen as a 2022 Parade Grand Marshal alongside Patricia.” – Cathy Underdown

The 76th Annual Bandon Cranberry Festival will be held in Bandon City Park, Bandon, Oregon, September 9-11, 2022. Events include a parade, festival market, evening dance and more. Boasting seventy-six years of family fun, the Bandon Cranberry Festival is the longest running festival on the Oregon Coast. The festival is a lively introduction to the Bandon community, as well as a time-honored tradition for residents.

Learn more and view the full schedule at www.bandon.com/cranberry-festival-events/.